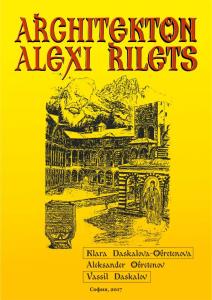 An attempt has been made to outline some aspects of Architekton Alexi Rilets’s contribution to the art of architecture during the building-up of the Rilan Monastery (1816-1819) and its restoration after the fire in 1833. These have been presented below:

-  The construction of the exterior façade as a monumental fortress,

- The construction of a unique cookhouse with large numbers of arches, vents and stabilising equalising girdles, which have converted it into a work of art of superb functional and ventilatory characteristics,

- The formation of the interior façade with spacious loggias and colonnades in the small and great architectural orders, in two variants (with and without intermediate arches), with kiosks of different forms and beauty and with firewalls, and

- The achievement of harmony between the Rilan Monastery, with Hrelyo’s tower, and the grand nature around them characterised by uneven, asymmetric and hardly accessible terrain.

An attempt has also been made to investigate by following the family tree of Alexi Rilets and his father, PeturFilipov, and grandfather, Filip Burzyakov. This tree has three branches originating from the architekton’s son, Dimitur the Teacher. There are a number of gifted patriotic Bulgarians among the descendants.